Kirsty Morris Selley and James McCafferty were the musicians for the sixth lunchtime concert and they brought an eclectic mix of musical styles. James explained that they both have Celtic backgrounds to some degree and both Irish and Scottish songs would be played.

Kirsty sang Erroll Garner’s ‘Misty’ to open the performance, the gentle harmony creating a sense of serenity. This was followed by James’s version of ‘The Fields of Athenry’, a haunting tale of the Irish Famine. The lyrics explain, ‘We had dreams and songs to sing’ which really sums up the atmosphere of both the song and the performers. ‘The Water is Wide’ added to this poignancy, the Seventeenth Century lyrics still very meaningful today.

The Celtic influence continued with ‘The Shores of Avalon’, its sense of refuge, homecoming and peace accentuated by the performers’ voices. We then floated into Kirsty’s soulful rendition of ‘Summertime’, a world away from the dank February gloom of Stony Stratford. Even the church decorators were painting in time to this sultry tune!

‘Said Judas to Mary’ and ‘Down in Yon Forest’ presented two viewpoints with a single belief: ‘And I love my Lord Jesus above anything’. Both of these songs showed such sincerity in such simple narratives.   The concert concluded with a favourite, ‘Greensleeves’ and ‘The Dark Island’. Again, a wonderful lunchtime interlude, with Dai Evans as compere to an appreciative audience. 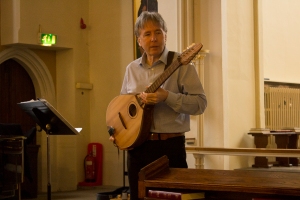 Kirsty at the piano