The fifth concert in this series featured James Jarvis, cellist, and Helen Rouse, pianist, a long term musical partnership which we were privileged to experience.

The overriding theme was of contrast, both in the instruments’ qualities and within the pieces chosen. Willem de Fesch’s Sonata in D minor opened the concert and the flowing melodies from piano and cello afforded the audience an opportunity to appreciate their distinctive sounds. The tempo quickened with the third movement, followed by Beethoven’s Andante and Variations in C major during which there was a wide range of contrasts – reflection and energy, tranquility and excitement, simplicity and elaboration. The audience – varied in age as well as musical talent! – became more and more engrossed. Mendelssohn’s ‘Song without words’, his last work for cello, has been quoted as ‘perfect and memorable’, an apt description as we experienced the performers create such intensity of feeling. Bach’s Suite No.1 in G followed and, again, the versatility of the piano and cello was apparent.

Three Russian pieces were next, ranging from the emotive and charged Rachmaninov ‘Vocalise’ to Skryabin’s passionate and bold musical patterns in ‘Romance’. But it was the brave and surprising ‘Allegro’ from Shostakovich that made us all sit up – what a thrilling conclusion to the Russian interlude and how inspiring for the St Mary and St Giles School pupils who listened intently.

Personal favourite, Thomas Pitfield, concluded the concert, with James and Helen playing his Sonatina, reminding us of the majesty, lightness and liveliness of these instruments. This was a great New Year start to the third Thursday concerts combining enrichment, expertise and energy for the appreciative audience. As always, it is Lesley Salter’s enthusiasm that ensures music of all kinds is enjoyed, and it’s the tea ladies who add that vital refreshment – many thanks!

This Music for all @ SMSG concert raised £55.33 for the Willis organ fund. 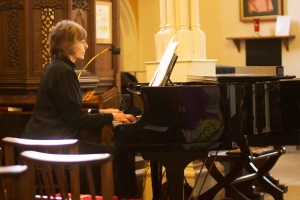